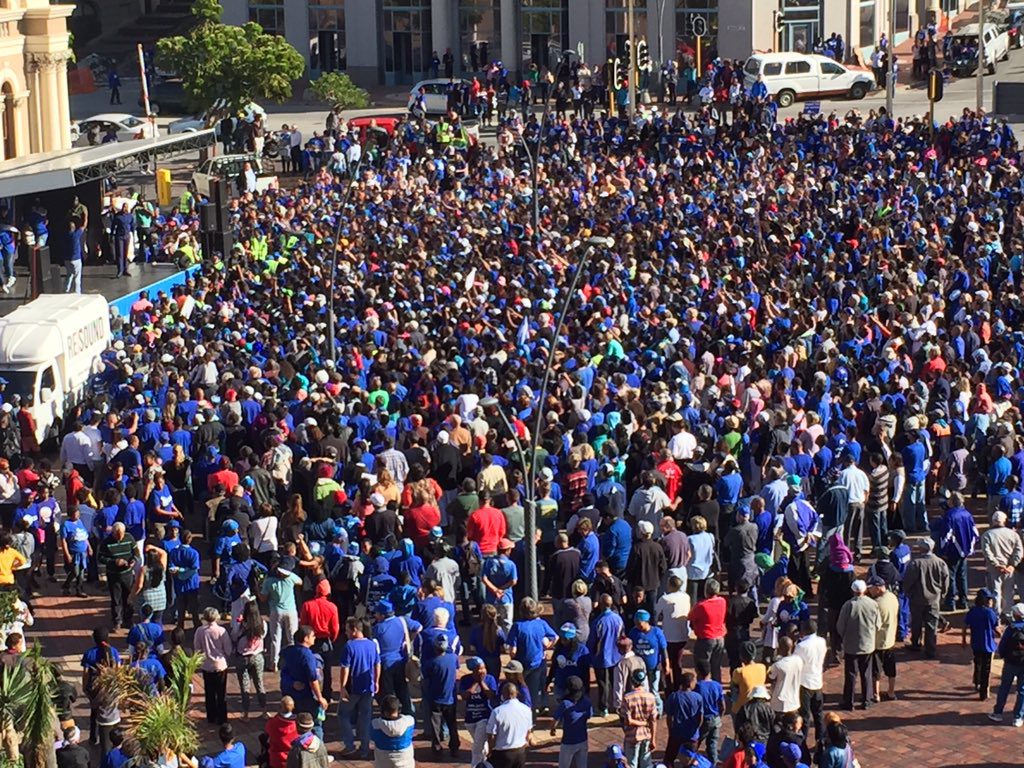 HAPPINESS IS: Everyone descended on Port Elizabeth's City Hall on Saturday to celebrate the DA's historic win over ANC

Port Elizabeth – Thousands of people of all creeds and colours descended on the square opposite Port Elizabeth’s City Hall on Saturday, singing and dancing to celebrate the DA’s historic win over the ANC in the local government elections.

And, while parties were still locked in negotiations about coalitions to govern the city, there was no doubt among the revellers that the DA was in charge of the Nelson Mandela Bay metro.

When the two took to the stage in front of City Hall, the crowds erupted in loud applause.

“As the DA grows and the ANC is whittled down to size, you will all be better off,” Trollip said.

Trollip referred to the letter he had sent to all municipal employees ahead of the elections, saying they were all voters in the city.

“Every official lives where you live. They want pothole-free roads, they want electricity, they want illumination at night, they want safety. They want corruption-free government, they want jobs and they want to be recognised for doing their work.

“I wrote to them and said ‘fear nothing’, because the government they work for always threatens.

Trollip said the ANC-led government had told staff that if the DA won, it would bring back apartheid, and would chase existing staff away.

He said that in his letter he told staff the DA wanted to work with those who wanted to stop corruption, improve the economy to create jobs, and improve service delivery.

“But I also said to them, ‘if you have been appointed irregularly, your job and your appointment will be scrutinised’. And I said: ‘if you have been involved in corruption, you will have to answer for those allegations and we will scrutinise them’.”

“When I look out over the people gathered here, I can see that the dream of Tata Nelson Mandela is strong and alive. A South Africa where black, white, Indian and coloured can stand together to build a South Africa for all,” he said.

“When we started here, they said it would be impossible, you will never do it, but as Tata [Mandela] said, it always seems impossible, until it’s done.”

Regardless of which party a person voted for, they would be entitled to municipal services, he said.