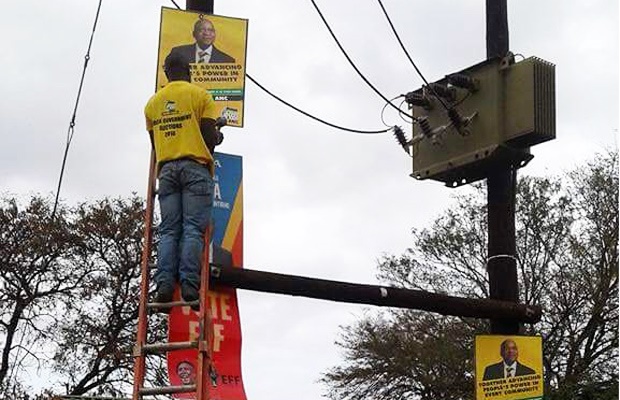 Cape Town – Eskom has urged political parties not to stick their campaign posters on electricity poles and mini-substations because it is dangerous and illegal.

“These structures are carrying live electrical equipment and conductors. When someone gets close to them or touches them it may result in a flash-over or electrical contact,” it said in a statement on Sunday.

People could be seriously injured or even die, the power utility warned.

Eskom said in terms of the Electrical Machinery Regulations, only authorised staff were allowed to climb or work on these structures.

Entering or using them for posters was also a contravention of the Occupational Health and Safety Act.

“Should someone come into contact with electricity while attaching posters to electrical structures, you will be exposed to litigation, both from a criminal and civil liability point of view,” said Eskom.

In 2014, a DA councillor was electrocuted while erecting posters for by-elections in the Mpofana municipality in KwaZulu-Natal.

Councillor Ken Denysschen had served as a councillor in the municipality since 2011.