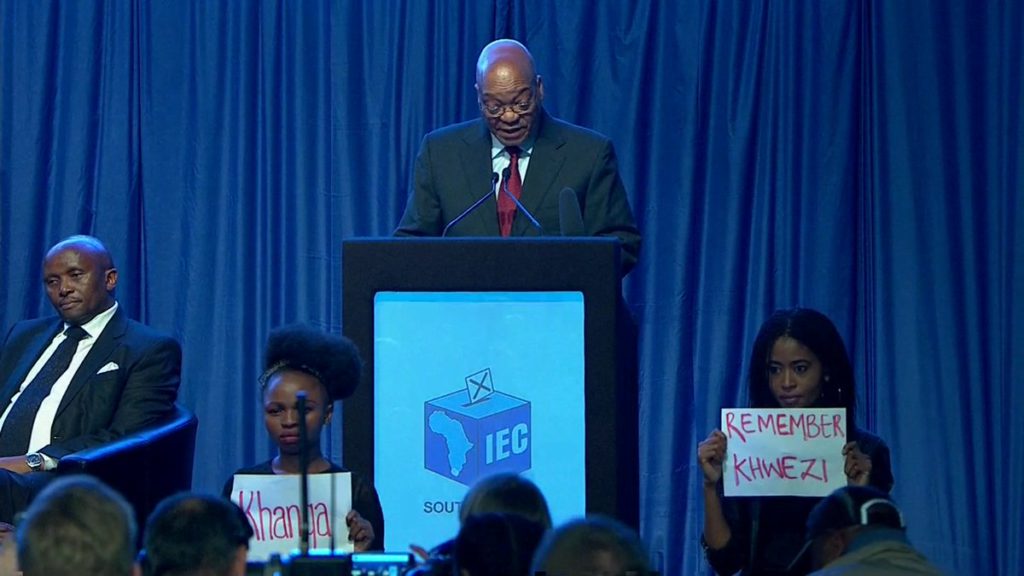 Pretoria – A group of women protesting against rape disrupted President Jacob Zuma’s speech at the IEC’s results centre on Saturday.

They did not say anything, but stood in front of the podium, facing the audience, and held up pieces of cardboard with the words “Khanga”, “Remember Khwezi”, “10 yrs later” and “I am 1 in 3”.

As soon as Zuma’s speech was over, he left the stage and IEC Deputy Chair Terry took the microphone to apologise to the president.

“We want to apologise to the president for the disruption that just happened. This took us by surprise, and we really want to apologise to all of you,” he said. “Can I request Kate (Bapele, IEC spokesperson) to make sure that members of the media do not exacerbate the situation?”

Meanwhile, the women were removed from the venue. They moaned and cried as security guards snatched the pieces of cardboard out of their hands and pushed them out.

One of them, Simamkele Dlakavu, tweeted soon after that she was OK.

“We are all okay. Thank you #RememberKhwezi,” she said.

They were making reference to Zuma’s rape accuser, who was called Khwezi by the media. She was a family friend and considered Zuma her father. She wore a khanga, or a wraparound cloth, when she claimed the president raped her in his Forest Town, Johannesburg home, 10 years ago. Zuma was found not guilty.

Before this happened, EFF members walked out of the results centre when Zuma took to the podium. Led by secretary general Godrich Gardee, they got up when Zuma was introduced.